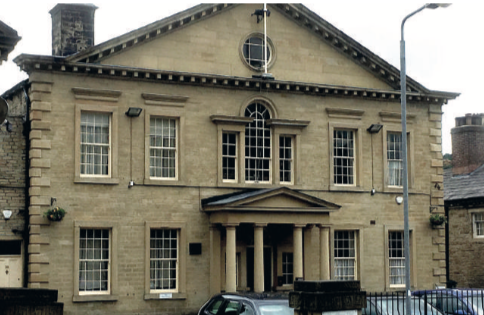 Posted at 15:53h in Heritage, News by Discover Halifax
0 Likes

A rare chance to peek behind the scenes of this beautiful Grade II* listed Georgian building. Home to many illustrious residents over the centuries, including Anne Lister’s coal rival, local luminary Christopher Rawson, and Sir Henry Edwards MP.

Hope Hall was built between 1762 and 1765 on Clare Road, Halifax, for David Stansfeld, a merchant in the clothing trade. The front of the building facing onto Clare Road was originally the rear of the house. It has a distinguished stone porch containing four columns. The forecourt, now a car park, would have been the entrance and exit for carriages.

Around the back, (originally the front) stone steps went up from the garden to the front door from both sides. The garden housed conservatories and fruit trees which stretched all the way down to the River Hebble. Above the staircase was a beautiful Venetian window, which is still intact today. The external steps are no longer there, with only an outline visible.

There are wings on either side of the hall, once used as stables and a warehouse for the merchant’s goods. On the south side of the building were cottages used by residential staff, gardeners and coachmen. The servants’ quarters were on the top floor.

During its lifetime, Hope Hall, once known as Hope House, had many notable residents, including Christopher Rawson, who moved there in 1808 following his marriage to Mary Ann Brooks. As
a Lieutenant in the service of the East India Company, Rawson had a distinguished career at sea and was offered a knighthood by George III, which he turned down, believing that he was not in a position to maintain such a status.

He returned to Halifax to join the family banking business in Royds House (now known as Somerset House). At that time, he worked closely with Anne Lister on political business. Anne’s visits to Hope Hall are referenced in her Journal. Rawson lived in Hope Hall until his death in 1849.

Other notable residents include Halifax MP Sir Henry Edwards. He was followed by Samuel Waterhouse, a former Mayor of Halifax who donated land on Harrison Road, where the Bluecoats School and Alms-houses were built.

Towards the end of the 19th century, the Industrial Revolution left its mark on Hope Hall and its estate. Successive owners sold off land to developers for factories, housing and the railway. The garden disappeared and the two wings of the house were sold separately.

The Northern wing was purchased by the CRS and almost became derelict, despite Halifax Civic Trust’s attempts to acquire and restore it. For a while the hall was unoccupied and demolition a real threat.

n 1906 it was purchased by the Albany Club. This gentleman’s club was the saviour of Hope Hall and over the years the building has been renovated in keeping with the classical style of the property.
The unmodified wings of the house are privately owned and in use and the adjacent cottage is let by the Albany Club.

Hope Hall will be open to the public for a rare peek on the weekend of 14 & 15 September for Halifax Heritage Festival from 11am until 4pm on each day.